October 19, 2017 – In April, Community Foundations of Canada and CAPACOA published Vital Signs: Arts and Belonging. Since then, new research findings shored up the idea that arts and sense of belonging are intimately connected.

In June, over the course of a fascinating web conference discussion on leisure time, we were presented the findings from the Community Wellbeing Survey, a joint initiative of the Canadian Index of Wellbeing and the Association of Community Health Centres. Seven thousand adults were surveyed in five mid-size Canadian municipalities and there was one single constant: in each municipality arts engagement was positively associated with sense of belonging in the community. 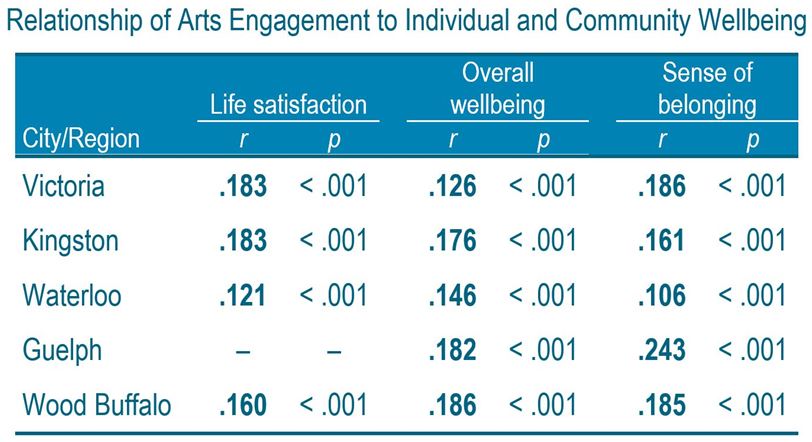 In this chart, the r figure represents the correlation coefficient that is, the strength of the association between arts engagement and the indicators of wellbeing. While coefficients between .100 and .250 are considered to be ‘mild,’ the fact that the correlation with sense of belonging was found in each of the five municipalities is quite meaningful (see slides 15-18 of the presentation for more details).

In addition, on the day following the above web conference, the Ontario Arts Council released Impressions of the Impact of the Arts on Quality of Life and Well-Being in Ontario. This opinion survey confirmed that Ontarians are sold to the idea of arts and community belonging:

There’s obviously much more to be said – and to be discussed – about arts and belonging. For example, the magazine Municipal World featured an article entitled Arts and Culture: Key to Building Belonging in its September edition.  The CAPACOA Conference will also explore the theme The Culture of Community from the angle of belonging.

On November 16, Arts, Belonging, and You will be an opportunity to examine research findings and to answer the most important question about them: so what? Along with Julie Lebel, from Made in BC – Dance-on-Tour, we will co-create actionable insights for making arts and belonging a reality in your community.

This session is sponsored by:

Additional Funding for Festivals and Series Presenters On Its Way
June 19, 2019
Cultural Diplomacy, among other Studies on Parliament Hill
June 5, 2018
A Short Brief
August 4, 2014
A Change and New Challenges for Canadian Artists Entering the U.S.
June 16, 2017