September 30, 2013 – This week is Community Health and Wellbeing Week. Why should the arts sector care? Because, whether we want it or not, we play a major role in people’s health and well-being.

According to the World Health Organization, “health is a state of complete physical, mental and social well-being and not merely the absence of disease or infirmity.” 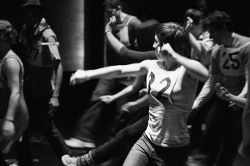 Research on arts and health has grown exponentially over the last 20 years and made a compelling case about the arts and their role in physical and mental well-being. We now have strong evidence that people who attend arts activities are more likely to report very good physical health and mental health, even accounting for other factors. They also have lower anxiety and are less subject to depression.

Research on the benefits of the arts demonstrated that they also participate directly in social well-being. Attending performing arts activities contributes to both social bonding and social bridging.

In recent years, CAPACOA has been interpreting its mission from the perspective of the ultimate outcome of the performing arts in the lives of all Canadians, which is to contribute to their complete well-being – very much in the sense of the WHO definition of health. This has reflected in our activities:

Most recently, CAPACOA has been reaching out to like-minded partners inside and outside the arts sector:

We see these activities as the natural continuation and expansion of the dialogue on the value of performing arts presentation.

It’s about joining force with others in building a smart and caring nation, as Governor General David Johnston put it. It’s about working together with other leaders who, like us, want to put well-being – through arts and through public health – at the top of the public policy agenda.

Music and Education: A Recipe for Success, September 25, 2013

Performing Arts Attendance and its Positive Association with Health, September 20, 2013

Tags: arts promotion
Share This Post
You May Also Like
Budget 2014 Renews Key Investments in the Arts
February 11, 2014
Fast-Tracking the Copyright Board of Canada
October 2, 2017
Arts on Prescription
June 14, 2016
Working Group Raises Taxation Issues with Finance Committee
July 26, 2017
Canadian Conference of the Arts: The End of an Era
October 30, 2012
CAPACOA Participates in Arts Caucus Meeting
February 27, 2013