November 5, 2012 – The Canadian Arts Coalition presented its third annual Arts Day on Parliament Hill, Tuesday, October 23. Over 130 arts leaders took part in 111 meetings with MPs, ministers, senators and key officials — and early indications are that the day was a success.

Arts Day participants — Canadian artists, arts workers, and arts volunteers — shared a common goal and strategic message, carefully crafted by the Coalition and focused on consensus issues within the sector that are reasonably aligned with Government interests and priorities.

This year’s message focused on two key policy priorities, the first of which was to ensure critical program renewals at the Department of Canadian Heritage. A suite of programs re-packaged by the Conservative Government in 2009 is set to expire in 2015. These programs are currently under review by the Department and include the Canada Arts Presentation Fund, the Canada Arts Training Fund, the Canada Cultural Investment Fund and the Canada Cultural Spaces Fund. A total of $80 million is up for renewal.

The second priority is one that has been championed by the Coalition since its inception in 2005: continued and increased support for the Canada Council for the Arts. Given the Government’s careful management of economic recovery at this time, our message was framed around sustained support with consideration for increased investment as the Canadian economy continues to recover. Last year, the Coalition’s Arts Day helped to protect the Canada Council from potential cuts, in a context of spending reductions across all departments as part of the Government’s Deficit Reduction Action Plan.

Once again this year, CAPACOA provided support in the preparation of Arts Day and was well-represented on Parliament Hill. CAPACOA staff and members, such as the Segal Centre, the Royal Winnipeg Ballet, Caline Artists International, CCI, and Victoria Steele Arts and Non-Profit Management, took part in several meetings with MPs and senators.

While we met with many MPs in Ottawa, we’d value our members’ assistance in sharing the message with MPs at home in the ridings. MPs are scheduled to be at home between November 10-18 for the Remembrance Day break, and this is a crucial time to sit down with them and make the case for the arts. A complete set of Coalition materials (notably, a meeting script, key arts facts, and a leave behind package) are available online.

Canadian Conference of the Arts: The End of an Era 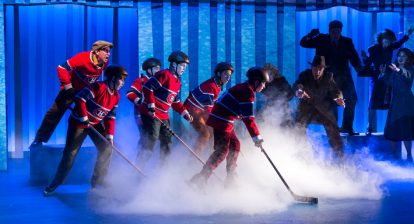