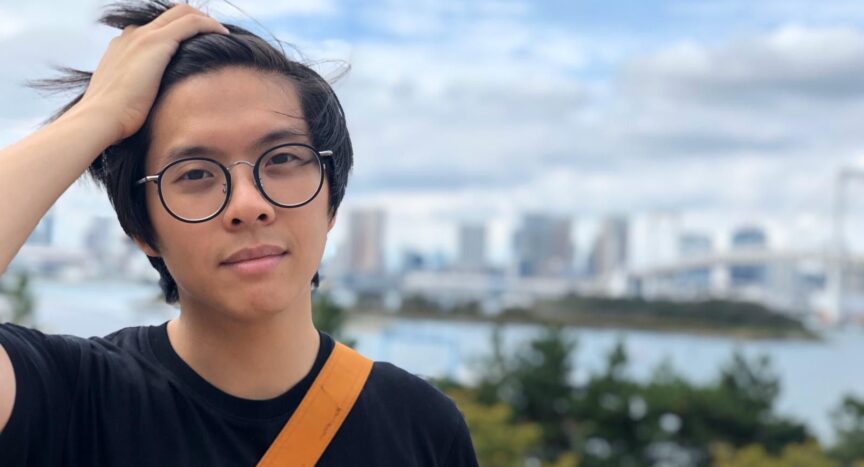 Welcome to our new series called Eyes On…, where we highlight some of our amazing members!

This month we’re featuring Milton Lim (he/him), an interdisciplinary artist based in Vancouver, BC.

His research-based practice entwines publicly available data, interactive digital media, and gameful performance to create speculative visions and candid articulations of social capital. His work has been presented across Canada, and internationally in the US, Argentina, the UK, Hong Kong, Singapore, and Australia. He is an Artistic Associate with Theatre Conspiracy, Co-Artistic Director of Hong Kong Exile, member of an AI-focussed collective called Synectic Assembly, and Artistic-Leader-in-Residence with Canada’s National Theatre School.

Alongside his frequent collaborator Patrick Blenkarn, Milton is also a co-founder of a video archive of performance (videocan), co-creator behind a performing arts economy trading card game (culturecapital), and co-creator of a video game about donkeys, labour, and revolution (asses.masses). Outside of their work in Canada, Milton and Patrick will be engaging in long-term international residencies in Buenos Aires, Recife, São Paulo, and Berlin over the next two years.

We had the pleasure of connecting with Milton a few days ago:

Tell us a bit about yourself and your work as a digital media artist, game designer, and performance creator.

Dear reader, I begin by asking: what can I share with you beyond the information that is already in my bio?

In my early years of elementary school, I harboured insecurities about not having friends. I spent evenings crying to my mother saying how no one would reach out to play with me at recess and lunch.

Just picture it: the 90s in a small city called Port Coquitlam in British Columbia on the west coast of Canada. I was a shy, short and nerdy looking, bowl-cut sporting Chinese kid wearing a hand-me-down (I think) Teenage Mutant Ninja Turtles t-shirt and neon green shorts. I would spend afternoons skipping rope with the wind on the playground, feeling lonely as I looked onward to the playground teeming with other kids I could’ve talked to, but didn’t. I was scared.

Of not being cool enough. Of rejection. Of putting my heart out there.

More than two decades have passed and so much has changed. These days I’m a quiet, short and nerdy looking, messy-haired Chinese man who wears a lot of black clothing. And I don’t skip rope anymore, though as I write this, I wonder if it’d be good to try again.

And yes, I did end up making friends. Some really amazing ones. But I still look onwards to other people a great deal.

I spend a lot of time trying to understand the unfolding moment: the sociality of digital culture, the ways in which games and play both naturally exist and are being manufactured in the systems that we participate in, and how we are called to perform in them. Perhaps it’s why my projects include an interactive phonebook archive installation using common Chinese names as a sample data set (whitepages), a tabletop role playing game that seeks to address real topics in the arts sector (FARCE), a card game to create a public forum where artists can simulate, playfully engage with, and zoom out on the sector (culturecapital), and a durational video game where an audience takes turns leading a herd of donkeys through revolution in a post industrial world (asses.masses).

In so many ways, the lessons learned and the experiences I had on the playground as a child still hold resonance for me.

How do you balance your life as an interdisciplinary artist working in such diverse environments?

I don’t know if I’d use the word “balance”. In my artistic practice, I tend to drive with concept first and then find the form afterwards. So I’m not weighing different sides of my practice and trying to find equilibrium as much as I am consistently testing out tools that will best speak to the core ideas. Sometimes that means using Isadora or TouchDesigner (node-based programming environments), or Unity (game engine), or directing, or acting, or in the very odd chance, dancing. I like being open and flexible to whatever a project might need.

I’ve also been fortunate to have found myself in a community of other artists who also create this way. We’re continuously learning new programs and trying entirely different ways of working.

How did you first learn about CAPACOA?

I’ve known about CAPACOA peripherally for many years, but it wasn’t until Aislinn Rose (Artistic Director, The Theatre Centre) invited me into some CAPACOA conversations that I connected personally and began to engage more deeply. Thank you Aislinn!

The goal of CAPACOA’s International Market Development initiative is to develop global digital exchanges around key markets of interest that lead to exciting opportunities and future collaborations. Speaking as a member of one of the virtual Brazil-Canada cohorts, what impact (if any) did your participation have on you as an artist?

Beyond the immediate value of having to articulate my practice and thoughts to other artists who don’t come from similar contexts and who inhabit very different ways of thinking and making, I think I’m still watching the beginning of the positive impacts to come.

In the short term, my participation in the CAPACOA conversations have already formed relationships that led to some upcoming touring and residencies (where we’ll get to meet in person and compare how short/tall we really are). And perhaps most excitedly for the long term, I certainly feel that I’ve met fellow artists with whom I’m sure I’ll continue to hold and foster ongoing discussions with for many years.

Do you have anything you’d like to say to other artists who might be interested in participating in one of our digital activities and/or becoming a member of CAPACOA?

On a day when one of the CAPACOA cohort meetings was slow, I noticed that we (the people in the virtual room) were not taking initiative with the conversation(s). That’s not uncommon in a Zoom room. I think many of us have had that experience before: listening to the kind of awkward silence that feels like a lost opportunity.

Well. If we want deeper conversation and stronger artistic discourse, I’ve come to believe that we all have to be responsible for each other.

So if you have a thought, say it. If you think someone is interesting, tell them. If you want to have a side-chat send a private message. Bounce ideas off each other. Email that friend you haven’t talked to in a long time. Actually get in touch to grab coffee with someone when you say you’ll ask them to coffee. Bring each other in. Put your heart out there.

What’s coming up for you?

Coming up, I am working with some of my closest pals (Patrick Blenkarn, Laurel Green, and David Mesiha) on that video game project about labour, revolution, and donkeys (asses.masses) set for its premiere in Spanish, at Buenos Aires International Festival (FIBA) in February 2023. Fun fact, this premiere is a direct result of the conversations and connections that happened through CAPACOA.

Patrick and I are also going to pick our arts economy card game (culturecapital) back up next year, so fingers crossed there will be a tournament in your area; we also have an upcoming book with Playwrights Canada Press about the project. Oh and we also have our continued work and advocacy as the co-founders and core archivists of the national video archive of Canadian performance documentation (videocan)—if you have performance documentation lying around somewhere collecting dust, please consider donating it so others can learn from and be in dialogue with your work!

I’m also part of the National Theatre School of Canada‘s Artistic Leadership Residency which is conducted through various week-long modules for the next year and a half. From February to mid-April 2023, Patrick and I will be travelling to Buenos Aires, São Paulo, and Recife for some long term residencies. Next summer, I am beginning some research with my dear friend Shawn Chua from Singapore, on The Last Resort: a speculative theme park project. And for six months in 2025, Patrick and I will be working with Darren O’Donnell and Alice Fleming on a project with some young people and the Humboldt Forum in Berlin.

Whew. To share an old statement repurposed for this context, I don’t know if I’d use the word “balance” here. But I also don’t know how and if I’d want to do things any differently.

If any of these things sound interesting to you and you’d like to connect or be in touch, please reach out! I’m sure we have a lot we can learn together.

Thanks for reading this, friends.

Thanks Milton! It was wonderful catching up with you. We wish you all the best on your upcoming endeavours and we look forward to hearing what else you have in store.

If you are a member of CAPACOA and would like to participate in this series, please email Communications Director Colin Frotten at colin.frotten@capacoa.ca for more details.